A Scientific, and wholly accurate list of the greatest Christmas Films of All Time 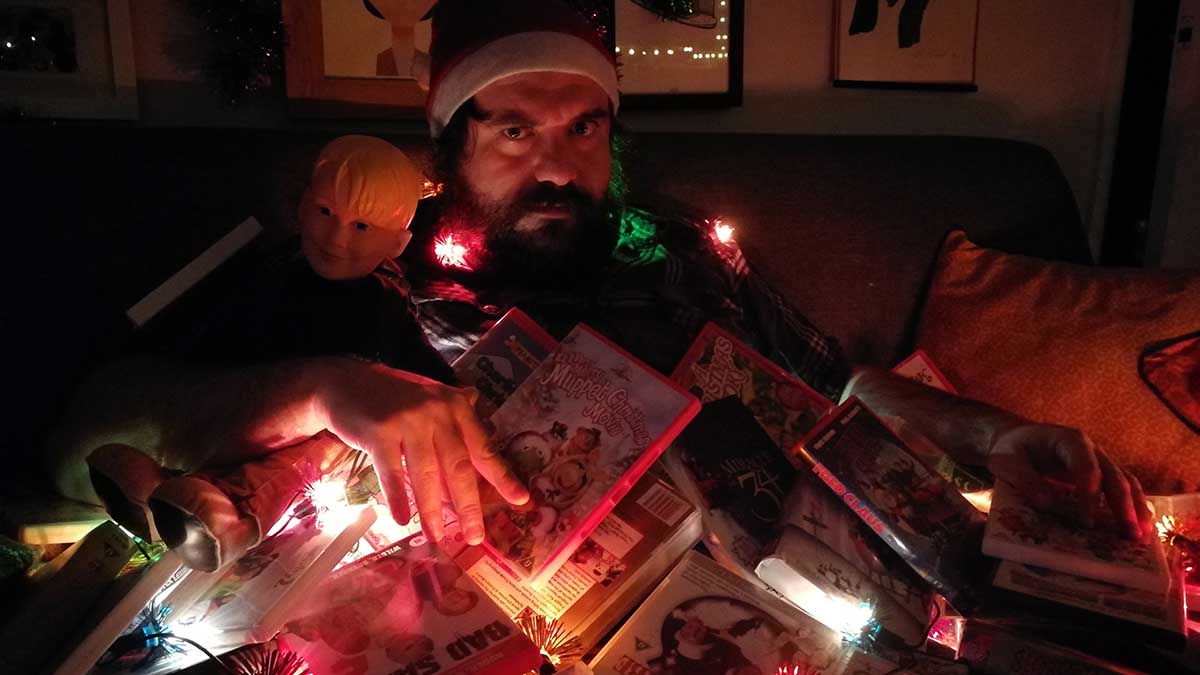 The perfect Christmas film needs three things. Firstly, it needs to be a good film. Secondly, it needs to ooze Christmas Spirit. Thirdly, it needs bloody good songs. The reason why your favourite film isn’t on this list is because it falls down too much in too many of these categories. Don’t blame me, blame science.

Ah yes, everyone’s been twittering on the facebook about whether this is a Christmas Film or not haven’t they? The idiots. It does lack in songs and Christmas spirit, but it’s a bloody great film, you know it, I know it, so let’s move on.

No, it’s not about Santa, yes it is good, yes it has some Christmas songs in it. It also teaches kids to obey rules, a very important point that is nice to have reinforced in the festive season. And it’s got Judge Reinhold in it.

OK, now this is a surprising entry, and if it wasn’t for the science behind this list I’d question it myself. It’s got Ben Affleck in it which automatically makes it a dreadful film, and there’s much in this film that leaves one wondering how it made it out of somebody’s head and into DVD bargain bins. However, what it does have, is James Gandolfini and Catherine O’Hara being their brilliant selves. This film deserves some sort of George Lucas CGI style treatment where Ben Affleck is digitally replaced by someone less dreadful (literally anybody would suffice).

OK, now we’re talking. A “proper” Christmas film… Or not, as the vast majority of the film is about as Christmassy as the shipping forecast. But it knocks it out of the park with the songs.

(Yes Maconie, we know that the title song is originally from Holiday Inn). 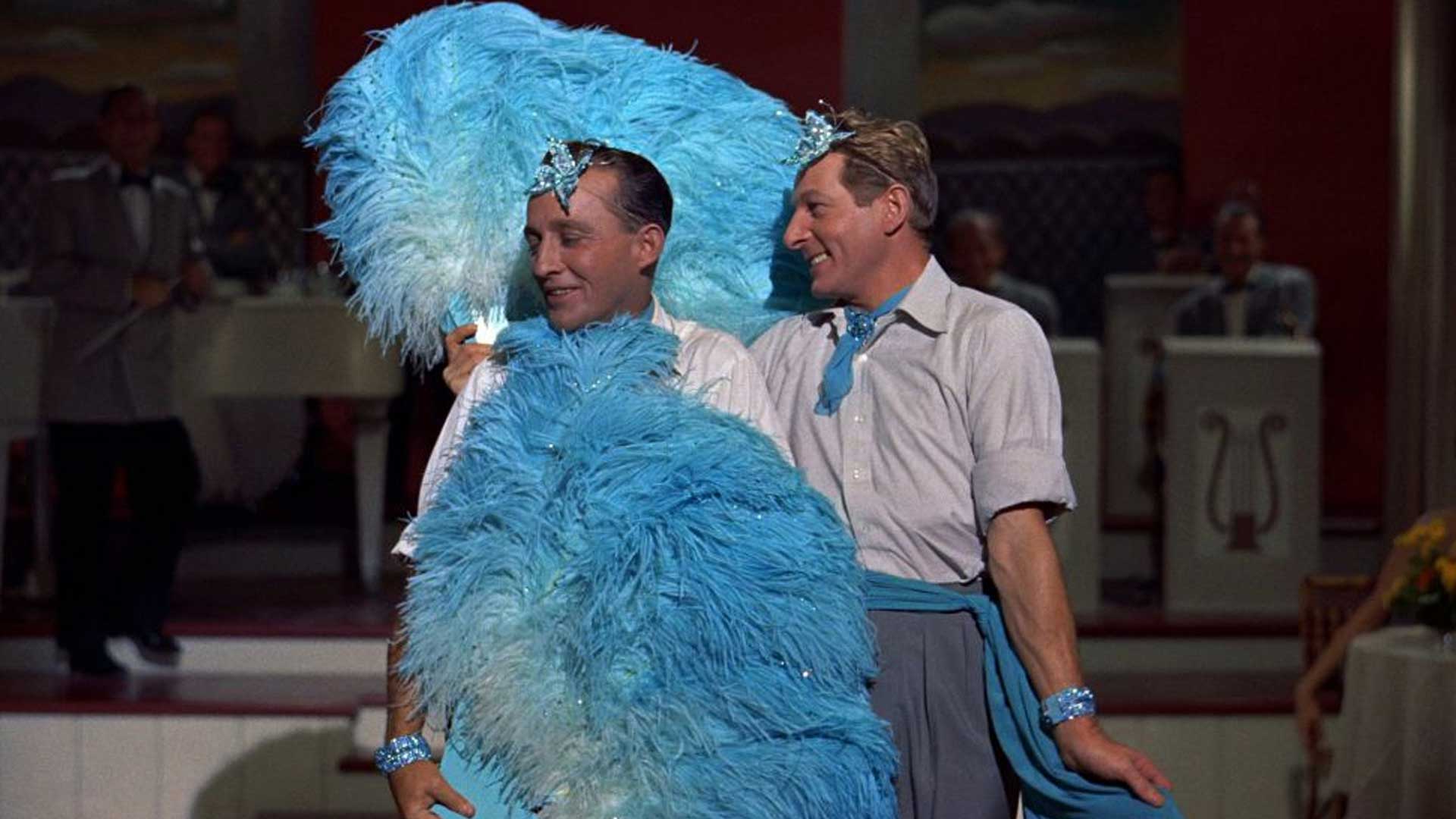 Oof, a stinker really this one. But it does have Christmas spirit in bucketloads. It’s got a poor, homeless kid being befriended by a rich one, and a proper Santa’s Workshop. It also has Sheena Easton’s “It’s Chriiiiiiistmaaaaaaaas… All over the woooorld toniiiight!” to save it from obscurity. Absolute banger.

Stone cold classic 80s comedy (which means completely gratuitous toplessness and blackface). I was almost questioning the science with this one, but then it dawned on me that although it is incredibly politically incorrect, the main storyline is about how horrible the plutocracy are and their inevitable downfall. Amen.

Christmas is just happening in the background of this magnificent piece of cinema from the Coen Brothers. The film doesn’t put a foot wrong and if it had a Christmas song or five in there (The Muncie Eagles song doesn’t count) I think science would have had it battling for the top spot.

A pretty pedestrian and songless affair. But it does have Judge Reinhold (which the science seems to have a bias toward) and Tim “The Tool Man” Taylor. The elf lad annoys the hell out of me, but I like that they made a whole film franchise off the back of one Marx Brothers line. Every credit.

16: How The Grinch Stole Christmas

The science was categorical in stating this is the 1966 Chuck Jones one and not (as science called it) “That Abysmal, Derivative, Soulless Jim Carrey Vehicle from the year 2000”.

The new one looks good doesn’t it? 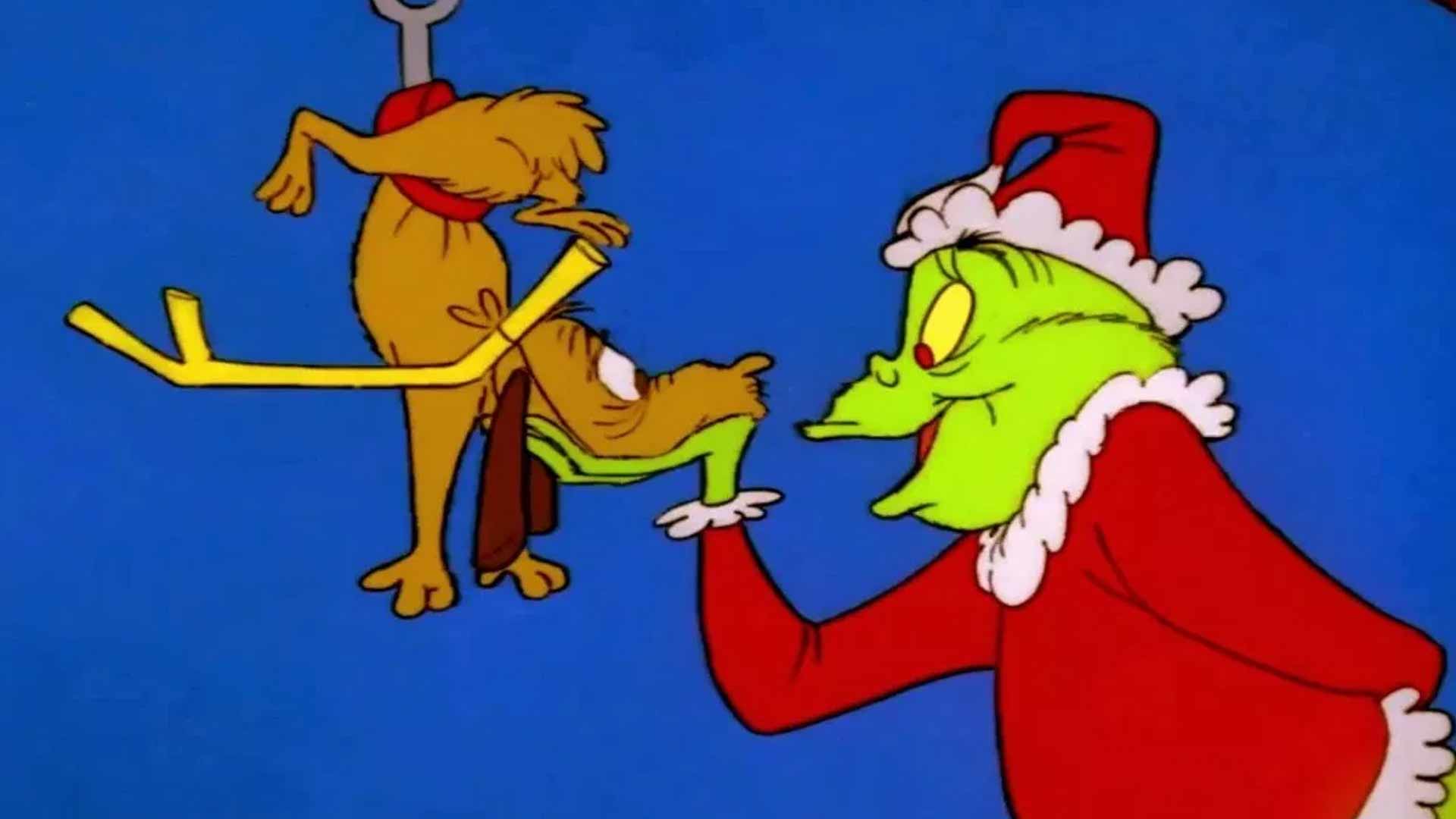 The only film that managed to get the real Father Christmas to – OF COURSE WE MEAN THE 1947 ORIGINAL! – appear in it. Yes there’s lackadaisical parenting and an uncomfortable child-abusing-courtship, but drunken Mrs Shellhammer is great. Not many tunes but the dutch Christmas song Chris Cringle sings with the girl is 100% Christmas spirit by volume.

14: The Year Without A Santa Claus

Fun fact – I own a copy of this on VHS which is some sort of pre-release version so every now and then a phone number flashes up telling you how to order the proper copy. So that’s nice isn’t it?

Matt Berry’s magnum opus. A 1970s rock opera parody with no tongue in its cheek. Quotable lines and singable songs a-plenty. Just truly remarkable. The highlight is Richard Ayoade’s Joseph – “Christ I swear I never touched her! But she tells me everything’s alright…”

Kids really, really like these films. Science said “you may as well lump the 2nd one in with the first, but the Martin Clunes one was phoned in so that doesn’t count”. Martin Freeman is good in  the first one, but David Tennant deserves a medal for the gusto with which he threw himself into his role(s). The kids are mostly fun too – mostly.

Let’s be honest though, without Marc Wootton, these films would be completely unwatchable for anyone over the age of 10. I am very not looking forward to Nativity Rocks on DVD next year.

Relatively unknown over here, but our American cousins love this film, and say what you will about the Americans, they know how to do Christmas. This is a love story to the commercialisation of Christmas, where one little boy wants a deadly weapon for Christmas. (“U-S-A! U-S-A!”) It’s great, funny, touching and only a little bit racist at the end. If anyone wants to get me a Leg Lamp for Christmas then please do. 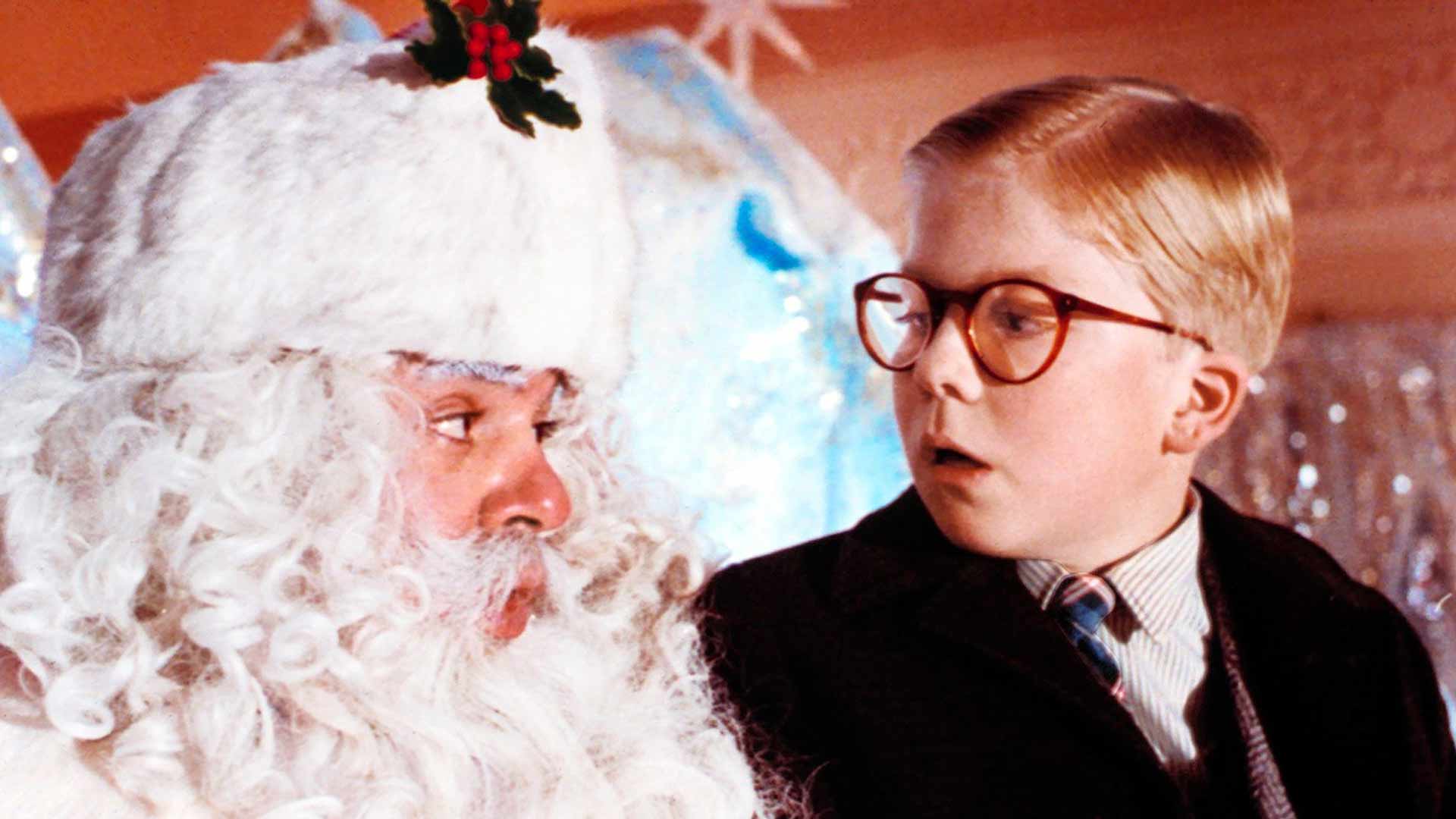 10: Olive The Other Reindeer

A Christmas animation by Matt Groening? “Yes please!” we all cry.

It… Looks… Pretty Odd though…

Yes it does, but it grows on you. Like “The Santa Clause”, it’s a whole film based purely on a pun, and it does it magnificently. The absolute highlight though, is Michael Stipe playing an angry singing reindeer. I suspect that’s why science rated it so highly.

“Let’s make a gross-out movie, tie it in with Christmas and rake in the cash. Easy money.”

Bad Santa could easily have been terrible – even with Billy Bob Thornton in it (Bad Santa 2 is living proof) – but somehow it isn’t. It’s a tremendous comedy film, with the spirit provided by Thurman Merman teaching Willie the true meaning of Christmas. The late, great Bernie Mac needs a shout-out for his incredible security guard. Why not down a shot every time he eats an orange segment?

Distinct lack of songs though…

When will Hollywood producers learn the error of their ways? *ahem*

The exception that proves the rule that rebooting-stories-for-modern-times leads to disaster. Everyone brings their A-game, but Carol Kane’s Ghost of Christmas Present abuse of Bill Murray is an amazing performance. The song at the end is high on Christmas spirit but it’s not really a Christmas song is it? I suppose we do get Bobcat Goldthwait’s drunken, shotgun wielding rendition of Santa Claus Is Coming To Town though.

God bless us, everyone.

You can watch all these in the space of one film, so why don’t you? Do you not like Christmas or something?

Oh, look at David Bowie there, introducing us to this Christmas classic… It can’t go wrong really from there can it. The song is great (admit it – and yes Maconie, we know it isn’t sung by Aled Jones) and you can’t really go wrong with a Raymond Briggs adaptation. I presume some of you are moaning about the song in the 2nd one, but I actually think it’s pretty good. It’s also nice to know that it must really annoy Johnny Borrell that his old drummer is immeasurably more talented than him – and that fills me with much festive cheer. Which brings us to Father Christmas. The best song out of all of them and liberal use of very-mild-sweary-language makes for a family favourite. Great stuff.

Chevy Chase. Great singer, but don’t know why the little fella from the video never got a shot at acting in any of his films. Seemed funny enough. Anyway, Christmas Vacation ticks all the boxes. Not many songs throughout, but the theme song by Mavis Staples is an absolute killer and whoever is in charge of getting it on Spotify needs to do it ASAP.

Too many quotable lines and great scenes to mention, so we’ll just move on. Otherwise we’d be here all day. (But the best one is Cousin Eddie’s about the microwave). 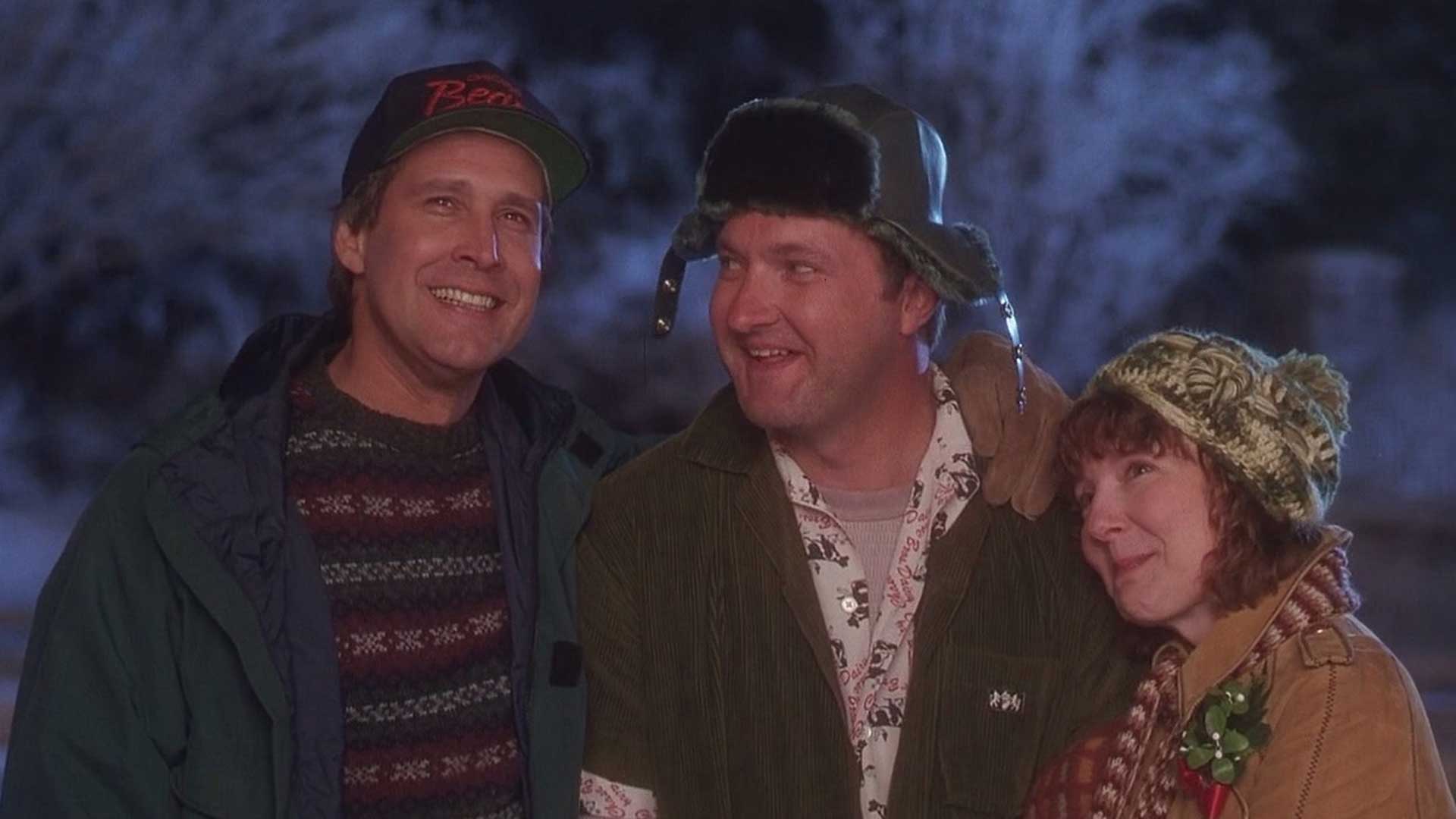 Vince Guaraldi absolutely slaying it with the music on this one. Big points there I suspect. It’s an absolute delight from start to finish. As our media is mocking 10 year olds with mental health issues, it’s nice to see the grandfather of depressed kids show us what Christmas is all about. Peace and Goodwill.

(I blame this solely at the feet of Jim “The Man Who Ruins Everything” Parsons* for that poorly thought out animation they did a few years back). Ignore these people, Elf is fantastic. It’s not trying to be anything more than a dumb, feel-good movie, which is what you want at Christmas. It’s also got Zooey Deschanel in it, so you can go listen to the She & Him Christmas albums when its finished.

Just don’t quote lines from it to people OK?

Science is allowing Home Alone 2 to be lumped in with the first one, and seeing as no more were ever made in the franchise** we’re happy to acquiesce. You don’t need me to tell you anything about these films, what you may need to be told about is the conspiracy theory that Elvis is in Home Alone. You can thank me for that little half-a-day wasting Youtube rabbit-hole later.

“It’s just the same film but worse!” you say?

No. OK, it’s not as good as the original, but that’s a pretty high bar you’re setting. It’s got a proper song by Darlene Love and the E-Street Band. I didn’t hear that on the first one did you?

Please don’t interrupt in future, you’re just embarrassing yourself. Don’t argue with science, or you’re no better than the guy who tells Kevin where the lobby is.

I’d like to think that everyone has seen this movie, and does so religiously at least twice every year. But if you think old black and white movies are stuffy and boring here’s the best line from this wonderful Christmas tale to try and change your mind:

It has been argued (by one member of the Mighty Giant team who disputes science) that this is a depressing film and isn’t about Christmas. However, Grace is wrong. It’s funny, life affirming and by the end you’ll be crying tinsel.

So what if George doesn’t get to fulfil his dreams? In a world full of Henry F. Potters who can? George’s Wonderful Life isn’t spent travelling the world (he’s ineligible for the army – there’s something to be read into that if you have the time or inclination between mince pies), it’s spent helping his fellow man get on in theirs.

“This rabble you’re talking about, they do most of the working and paying and living and dying in this community. Well, is it too much to have them work and pay and live and die in a couple of decent rooms and a bath?”

And it all ends with a good old sing-along of Auld Lang Syne.

Christmas Spirit? Bubbling over with it.

Good Songs? Only the best

That’s how Michael Caine approached the film, and that’s why the film works so well.

Gonzo plays Dickens and for the most part directly quotes the original text. There’s no effort to dumb it down or bring it up to date. It’s just a ridiculously good telling of the story, made even better by having the geniuses behind the Muppets on board.

And the songs are truly wonderful, even when sung by Michael Caine (yes Maconie we did spot Micklewhite’s shop in the background – will he ever leave us alone?). Science can’t find a fault in this film and neither can you.

As we’ve established, there’s no debate over whether this should be #1 on the list, the only question is which song is your favourite? 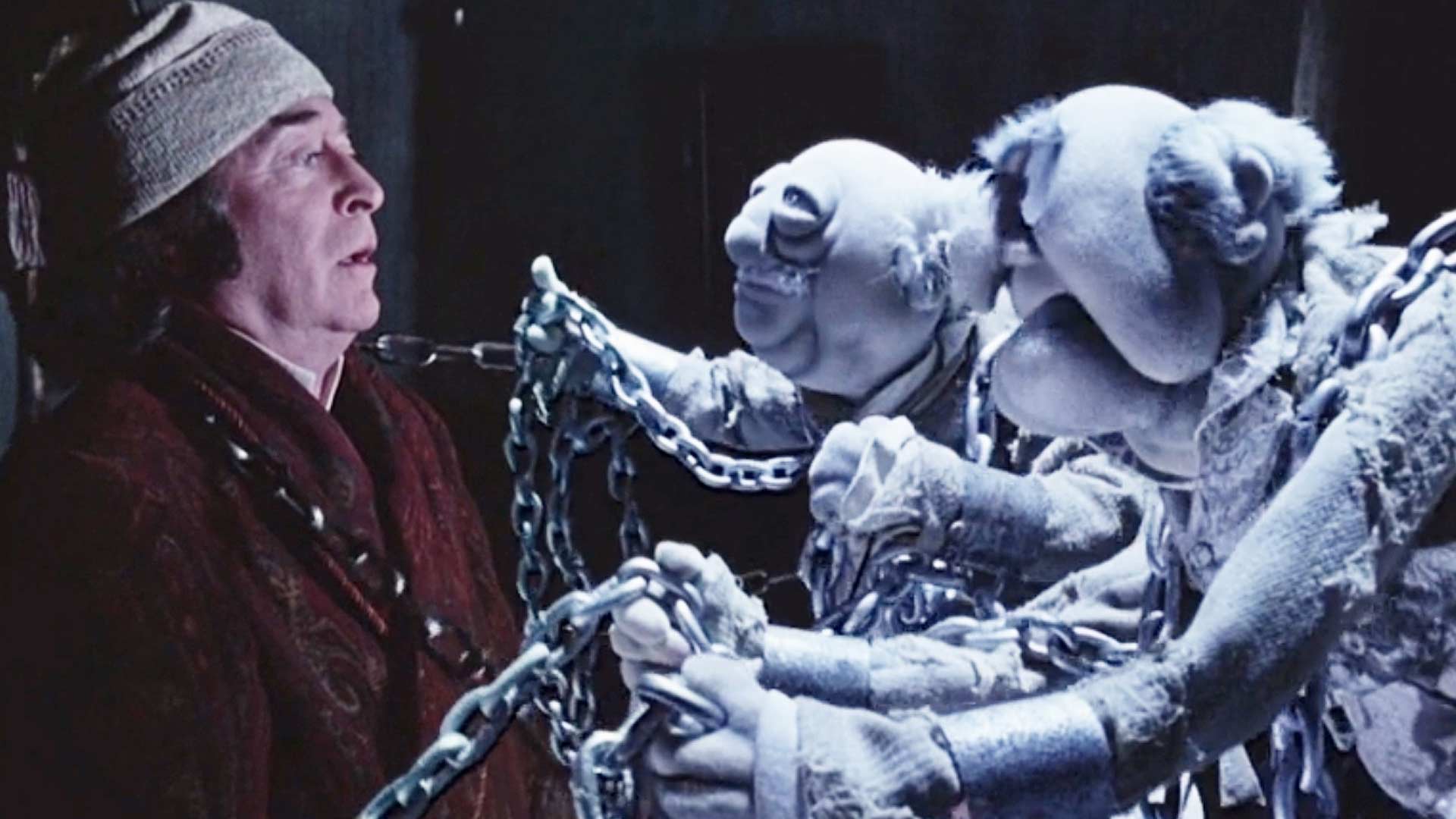 *The exception being The Muppets movie. Nobody can ruin The Muppets***

** NO MORE WERE EVER MADE